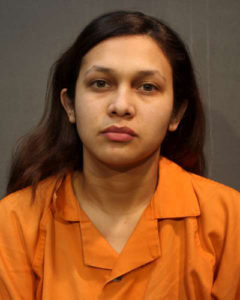 Sioux City police have identified the woman stabbed to death Sunday morning on the city’s west side. Police say 24-year-old Kenia Alvarez-Flores died outside her home from numerous stab wounds.

Detective Nick Thompson says police arrested 20-year-old Melissa Camargo-Flores of Dakota City, Nebraska after stopping a vehicle within minutes of arriving at the crime scene. He says an officer stopped the car and noticed that Camargo-Flores had heavy amounts of blood on her clothing. She says taken to the hospital and treated for a self-inflicted stab wound to the leg that he says is non-life threatening.

It is believed Camargo-Flores accidentally stabbed herself in the attack. She was treated and released from the hospital and then booked into the Woodbury County Jail on a first-degree murder charge. “We determined throughout the investigation that the suspect had waited outside the victim’s residence and was waiting for her to go to work. And as she was walking to her car to get in and go to work she was approached by the suspect and stabbed multiple times ,” according to Thompson.

Thompson declined to comment on a possible motive for the stabbing — but says the two women had multiple issues with each other and are not related. It is the sixth homicide in Sioux City this year. Camargo-Flores is being held in the Woodbury County Jail on a $500,000 bond.