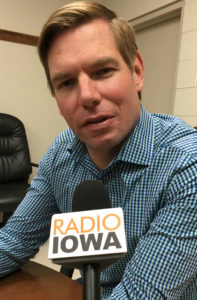 A California congressman says Democrats need to heed the lessons of 2016 in order to retake the U.S. House in 2018.

Congressman Eric Swalwell was in Iowa the past few days, helping local candidates raise money and discussing his party’s approach to win over voters who supported Donald Trump rather than Hillary Clinton.

“It’s really about people who truly were disconnected from opportunity, who were fed up with politics as usual in Washington,” Swalwell said Sunday during an interview with Radio Iowa, “and so we can dismiss who sits in the Oval Office, but we shouldn’t dismiss the people who sent him there and why.”

This isn’t Swalwell’s first visit to Iowa over the past few months and he barely brushes aside the speculation that he may run for president in 2020.

“Let’s win the House and then take our decisions one at a time,” Swalwell said. “But I think for 2020 the best thing the country could see would be a crowded Democratic field with a lot of new energy, new ideas and new leadership.”

Swalwell, who is 37, was born in Sac City in November of 1980, but soon after his family moved to Algona where his father was a policeman.

“He would bring his cop car home and I would tell him all the time I wanted to be a police officer and he would always tell me: ‘It doesn’t work that way,’ and then later would show me when I really could understand what he meant, through his hard work, that he wanted me to be the first in the family to go to college,” Swalwell. said. “So that idea that hard work could mean something and that you could dream bigger for your kids than you could for yourself, that, for me, started in Iowa.”

This weekend in Iowa, Swalwell traveled from the eastern border to central Iowa. He visited a farm near Ankeny on Sunday to highlight what Swalwell called President Trump’s “reckless impulses” on trade.

“We don’t want China to hurt the American workers, but President Trump, his impulses are not the way to go at this,” Swalwell said. “What he needs to do is the hard work of working with our allies to prosecute the case.”

That means “stitching together alliances” with countries in Europe and the Pacific that Swalwell said also are slammed economically by China’s actions rather than a go-it-alone trade war with China.

Swalwell represents the San Francisco bay area in congress. He will be back in Iowa next weekend for a Scott County Democratic Party fundraiser in Davenport. Los Angeles Mayor Eric Garcetti, another Democrat considered to be a 2020 presidential prospect, will appear at the same event.