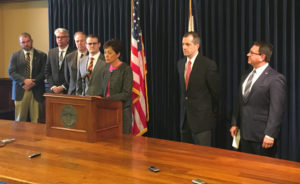 Governor Kim Reynolds today said she’s been assured by the U.S. Secretary of Agriculture that the Trump Administration soon will announce a plan to “mitigate” farm losses connected to the trade dispute with China.

“I would think it’s forthcoming. I don’t know whether it’s tomorrow or the next day,” Reynolds told reporters during a midday news conference in her statehouse office. “I can just tell you they’re working on it and that the secretary’s assurance to me is that it can be done through U.S.D.A.”

“They both assured me that the U.S.D.A. has the authority to mitigate some of the market disruptions for our farmers,” Reynolds said, “and they wanted me to pass on that they appreciate that the farmers understand that something needs to be done to hold China accountable.” 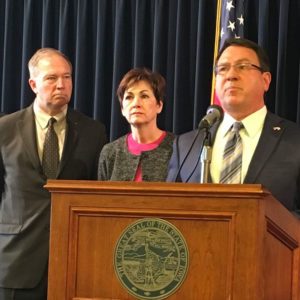 As for what form that assistance might take, Reynolds told reporters administration officials are “working through the details” and weren’t “at liberty” to discuss whether it might be rival of a price support system or some other means of financial support for farmers.

“They’re working on an option for Iowa farmers,” Reynolds said. “They don’t want them to be a casualty in this trade dispute.”

Reynolds had an array of leaders from Iowa commodity groups join her for her weekly news conference. Iowa Soybean Association president Bill Shipley of Nodaway said farmers recognize there are “some legitimate issues” about Chinese theft of intellectual property and they hope the dispute can be resolved without targeting food.

“China’s proposal to add tariffs to soybeans adds to uncertainty US farmers face right now as we head into this planting season,” Shipley said. “…If allowed to take hold, it could jeopardize the ability of US farmers to do business in China for generations. Trade wars involving food are lose-lose.” 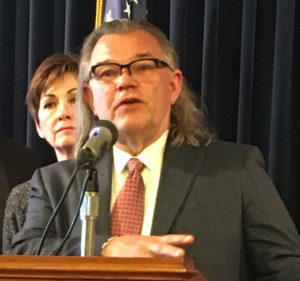 “Iowa pig farmers look forward to helping tackle the challenges or changes that we can impact in these difficult times and decisions,” Hora said, “with outcomes that we, hopefully, will all be proud of.”

Steve Sukup of Sukup Manufacturing in Sheffield said his company uses a million pounds of U.S.-made steel per week — and the price of that steel has gone up 40 percent. The prices for the company’s grain bins and other products have gone up about 20 percent. According to Sukup, about 83 percent of the steel used by U.S. manufacturers is made in the U.S.

“It was only like 17 percent of imported competition out there, so we didn’t really need to see steel be the ‘tip of the spear’ (in a trade war),” Sukup said.

Sukup, a former state legislator and Republican candidate for governor in 2002, told reporters there “hasn’t been a trade war the U.S. has won.”