You are here: Home / News / Legislators get into another spat about president’s official photo 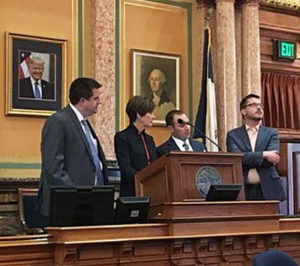 Governor Reynolds talks with her staff in front of the photo of President Donald Trump.

A heated “picture-gate” debate erupted in the Iowa House today. It happened during discussion of a proposed constitutional amendment giving any lieutenant governor who becomes governor clear authority to appoint someone to serve as lieutenant governor.

Republican Representative Chip Baltimore of Boone accused Democrats in the Iowa House of trying to avoid the official photo of President Donald Trump that hangs near the center of the House.

“I have witnessed myself a number of people in this very chamber who won’t even have their picture taken in the speaker’s chair except at an angle so that the president of the United States, who was elected by the people, doesn’t show up in the picture,” Baltimore said.

Representative Dave Jacoby, a Democrat from Coralville, shot back.

“We learned how to take those pictures from you,” Jacoby said. 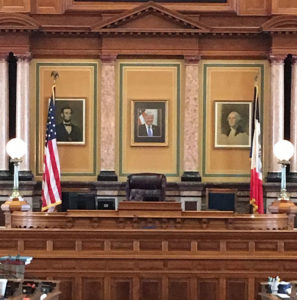 The photos of the presidents.

Another Democrat in the House chimed in, saying Democrats noticed Republicans trying to avoid putting Barack Obama in the frame when they were taking pictures when Obama’s official photograph hung in the House. “We never mentioned it,” Representative Sharon Steckman, a Democrat from Mason City, said. “That really splits people apart even more. I’m sorry to hear that.”

The president’s picture hangs at the front of both the Iowa House and the Iowa Senate. Years ago, the Republican president of the Iowa Senate apologized after President Bill Clinton’s official photo was removed temporarily for a picture-taking session.

Recently, Trump’s photo was removed for a brief weekend wedding ceremony in the House. That prompted the Republican speaker of the House to declare the president’s official photo was never to be removed for any reason.