You are here: Home / Sports / Graceland basketball team and Iowa’s Spencer Lee honored at the statehouse 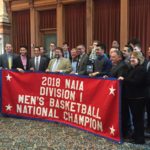 Legislators at the statehouse honored college athletes from Graceland University and the University of Iowa who won championships this year. The Iowa House passed a resolution honoring the Graceland men’s basketball team.

Justin Harley’s three pointer at the buzzer in overtime lifted the Yellowjackets to the NAIA Division I championship with an 83-80 win over LSU-Alexandria in Kansas City last month. It was Graceland’s first national title.

Iowa wrestler Spencer Lee was honored in the Iowa Senate. Lee won the NCAA Championship at 125 pounds, became the first true freshman to win a national title for the Hawkeyes since 1993.

“Thank you for having me here. It truly is an honor”, said Lee. “I would like to thank my friends, my family and my coaches for this opportunity. It is wasn’t for them I would not be the person or the wrestler I am both on and off the mat and in the classroom as well. Go Hawks.”