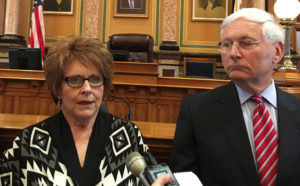 It’s the latest wrinkle in discussions among statehouse Republicans over how deeply to cut state taxes.

“Over 90 percent of the taxpayers will benefit,” Upmeyer said during a news conference on the House floor. “…It’s important for us to have families across this state see the benefit of putting tax dollars back in their pocket. I think this meets that goal.”

Senate Republicans have voted for a plan that would ultimately cut state taxes by $1 billion annually. Republican Governor Kim Reynolds has proposed what would amount to a $300 million a year reduction in taxes. The House Republicans’ plan is a $140 million cut in the first year and a reduction of $300 million in the second year.

Upmeyer called it a “starting point” in negotiations and she said it was intentionally released late on a Wednesday afternoon to give House members a chance to hear from constituents this weekend.

“They’re having forums or they’re going to different events in their communities,” Upmeyer told reporters. “We can get a lot of good feedback and then we can build the bill even more, if we wish to, based on that feedback.”

Unlike Senate Republicans, House Republicans are not proposing a cut in the corporate income tax rate. Representative Guy Vander Linden, a Republican from Oskaloosa who is chairman of the House Ways and Means tax-writing Committee, told reporters corporate tax cuts can come “at a later date.”

“The important thing is to get a tax cut to individual Iowans,” Vander Linden said, “so that they get the full benefit of the federal tax cut.”

The House GOP plan does call for taxing Uber, Lyft, Netflix, Apple TV and other emerging services in what Vander Linden called the “modern economy.”

The plan does not raise taxes on some credit unions, as Senate Republicans proposed, nor does it get rid of the state income tax deduction for an individual’s federal tax payment. Critics say that deduction makes Iowa’s income tax rates look higher than they are and Governor Reynolds called for getting rid of it.

Vander Linden’s committee is scheduled to begin debating the plan at 10 a.m. Thursday morning. The head of the Iowa Freedom of Information Council said the lack of advance notice of the meeting to the public violates the spirit of Iowa’s open meetings law. A top House Democrat warned the House GOP tax plan “means more state budget cuts in the future.”