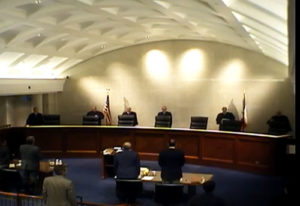 The Iowa Supreme Court heard oral arguments Tuesday on whether the Iowa Department of Transportation has the legal authority to regulate the use of traffic cameras on state highways.

Attorney Dennis Fulton represents Muscatine, which along with Des Moines and Cedar Rapids say the state agency can’t make them take the cameras down. Fulton told the justices the cameras were put up to improve safety.

“Safety was improved by utilizing these cameras. The City of Muscatine for instance had 13,000 violations on a stretch of Highway 61 and University Drive in the first year of the cameras. Then in the second year those violations went down to 8,000 — more than a third drop,” Fulton says. 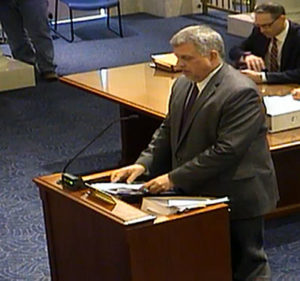 why they feel the DOT shouldn’t be allowed to follow through with them . “We believe that….the problem with the DOT’s assertion of authority in this case is that there is not specific grant of authority to oversee ATE’s (automated traffic enforcement),” Fulton says.

Justice David Wiggens followed up with another question. “If the DOT doesn’t have authority over the primary highways, can each city put up whatever kind of sign they want,  different shapes, different sizes on the highway,”Wiggens asked. Fulton responded, “No because that’s actually regulated by statute. And that was my point of saying that there are many places where the legislature has given the DOT specific authority over certain aspects of the public highways, obstructions in the public highways.”

Richard Mull argued the case for the state. Mull told the justices the DOT has the authority to keep the highways safe and says regulating the automated traffic cameras is similar to regulating the signage and other signals. “And while ATE equipment is not technically a traffic control device, I would submit that it’s got some common characteristics from an analogy standpoint that kind of suggests the DOT should be in a position to regulate the safe placement of traffic cameras on the primary highway system,” 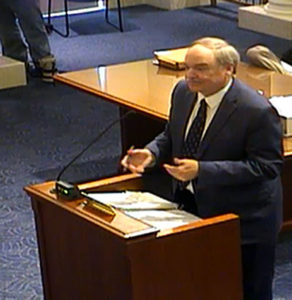 He was asked if the traffic cameras physically obstruct the roadway. “In Sioux City on I-29, the city of Sioux City had place a mobile traffic camera unit on the shoulder of the interstate. And that was struck by a motor vehicle,” Mull says. “That would be an instance where yes it was a physical obstruction. And that was certainly a motivation for several of the for these administrative rules.” Mull says the cameras that are mounted about the highway could also pose problem.

Mull was asked about whether he thought a previous Supreme Court decision that determined the DNR had the right to quarantine deer with CWD, but not the right to quarantine the property where the deer was found because they were not given that specific authority to do so. Mull told them he feels there is a difference in that case and this one. ” I think the court sensed there was overreach in that they were trying to apply those rules to a private property owner’s land. That’s the distinction that I could come up with,” Mull says.

Mull told the justices the rules were developed for four reasons, the first being to ensure safe placement of the Automated Traffic Enforcement devices. the second to ensure uniformity in their placement on the highways, third to require documentation of the justification of the placement of the cameras. And finally he says the rules provide an objective review for the need to have the traffic cameras. Mull pointed out that the DOT does not take any of the money generated by the traffic cameras in order to ensure that it maintains objectivity in carrying out the rules.