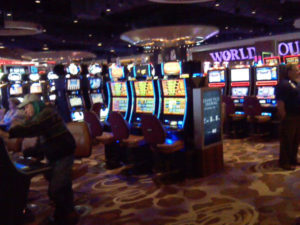 The Hard Rock Casino in Sioux City agreed to a penalty today from the Iowa Racing and Gaming Commission for allowing minor to gamble.

Racing and Gaming administrator, Brian Ohorilko, says it happened in November. “She was on the floor for 56 minutes and had gambled at two different slot machines. The facility did notice her after she had been on the floor — approached her requested identification — and she refused and exited the casino quickly. It was determined later that she was indeed underage,” Ohorilko says. He says the situation met all the three criteria to be considered a violation of underage gambling.

He says the past precedent is for an administrative penalty of $20,000s and the Hard Rock agreed to pay that penalty. He says the penalty was based on the past history of the casino.

Ohroilko the casino has not had such an incident in the last 365 days, so it is considered a first offense. Ohorilko says state agents will determine if the minor is charged.

“There is a state law which would allow for a minor to be cited criminally,” Ohorilko says. “And so in a situation like this what typically happens — and what happened in this case — is it would be turned over to the Division of Criminal Investigation.” The IRGC took the action at their meeting in Council Bluffs.