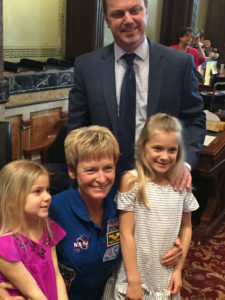 “It’s really a fantastic honor to be back here and to have you guys honor me like this. It’s very special,” Whitson said during remarks on the House floor. “I will tell you that I never forget my Iowa roots.”

Whitson is a Beaconsfield native, a graduate of Mount Ayr High School and Iowa Weslyan College in Mount Pleasant. She has spent 665 days in space — a record for a U.S. astronaut.

“Everyone’s always asking what made me successful and I would have to say that learning the work ethic of a farmer was key to that,” Whitson said. “My parents — the hardest-working people I know and being from Iowa has been a fantastic experience for me and one I’m very proud of.”

The resolution passed in the House and Senate noted Whitson’s persistence. Whitson applied to be an astronaut five times before she was accepted into the program in 1986. Representative Cecil Dolecheck of Mount Ayr noted April 12th is an important date in space history. April 12th, 1961 is the data a Russian astronaut made the first manned space flight. April 12th, 1981 was the date of the first Space Shuttle launch.

“I believe it worked out nicely that the Iowa State Legislature will be honoring Iowa’s own record-breaking astronaut on the same date in 2018,” Dolecheck said.

Female legislators praised Whitson as a role model for girls considering a career in science. The resolution passed today in the House and Senate noted Whitson has been called a “space ninja.” It formally thanked her for encouraging boys and girls from towns of any size to “dream big and reach for the stars.”