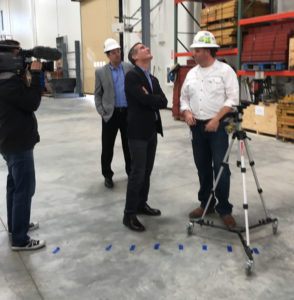 Los Angeles Mayor Eric Garcetti during a visit to Altoona.

The mayor of Los Angeles is in Iowa this weekend for a campaign-style tour that includes a Saturday night fundraising banquet for Scott County Democrats and a walk down the street of a booming Des Moines neighborhood this afternoon.

Eric Garcetti told reporters he will decide next year “whether to jump in” to the Democratic presidential race.

“There’s a false dichotomy between red and blue, heartland and coast, rural and urban. The only ‘two Americas’ that exist right now are Washington and the rest of us,” Garcetti said. “I think we are increasingly frustrated to hear and to see what’s coming out of Washington, D.C. that isn’t listening.”

Garcetti told reporters in California this week it is “B.S.” to characterize the nation’s heartland and its coasts as divided against one another. Today, on Iowa soil, Garcetti distanced himself from the so-called “resistance” movement who argue Democrats must be more left-leaning.

“Some people talk about the resistance,” Garcetti said. “I’m more interested in what we can get done. I’m more interested in things that are out there (like) American infrastructure, a sensible trade policy that will result in jobs — not whipsawing us back and forth one day, wondering at the job site if iron is going to be more expensive.” 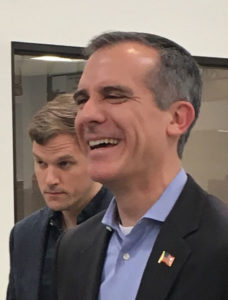 Garcetti suggests focusing on “practical things” like health care, education and retirement security will be the path forward for his party.

“I’m not here looking for a new job for me,” Garcetti said. “I’m looking for new jobs for Americans.”

Garcetti made his comments after a tour of a new facility in Altoona where union carpenters are being trained for construction work.

“These aren’t just carpenters. They’re entrepreneurs. They’re keeping up with the most cutting-edge technology,” Garcetti said. “That seems to be a pretty more urgent call for us right now than any of our own futures.”