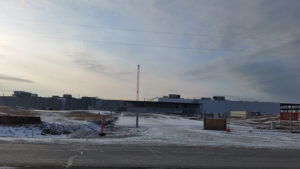 The Prestage plant under construction near Eagle Grove.

The recent snow and prolonged winter weather have caused some delays in construction of the massive $240 million pork processing plant in north-central Iowa.

“I’ve been amazed at the work that’s been accomplished in pretty tough conditions,” Prestage says. “I’d say as a result of some of that, we’re probably a little behind schedule but I don’t think it’s a really big deal. We still intend to start processing pigs in the plant before the end of the year.” One of the set-backs was missing the goal to finish putting the roof on the facility last fall before the cold, wet weather arrived.

“We ended up with kind of a wet December and we didn’t have 100% of the roof on before it started getting wet, either from snow or rain,” Prestage says. “You have to do things kind of the hard way where you have to go in and remove muddy soil out from underneath those areas that you’re pouring floors on.” Prestage says key staff members are being brought on board, but the big hiring push won’t come for a few months yet.

“We’re in the process of finalizing some of the stuff with the state of Iowa and the local community colleges for training,” Prestage says. “We’ve already started hiring people, for example, plant engineers, IT people, accounting people and stuff like that.”

As many as 1,000 workers will be needed to run the plant. Interviews and hiring for those hundreds of positions won’t likely start until mid-summer.