A massage therapist in the Des Moines metro is accused of sexual assault.

Clive Police Chief Michael Venema says after an arrest warrant was issued, 26-year-old Gage Bauer of Altoona turned himself in this morning.

“Two different women reported to us recently that Mr. Bauer attempted to or did perform a sex act on them during the course of a massage,” Venema said. Bauer operates “Mr. Massage Iowa” in Clive. 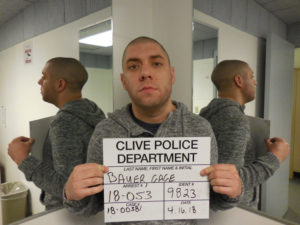 He’s charged with assault with intent to commit sex abuse and sexual abuse in the third degree. Venema identified the two victims as an adult woman and a 17-year-old girl. Venema expects more victims could come forward.

“This business has been in operation for some time and we know of two victims. We’re hoping if there are other victims out there, who may’ve been reluctant in the past to come forward…we hope they would come forward to help us bring this to a successful conclusion,” Venema said.

As of early this afternoon, Bauer was being held in the Polk County Jail.