You are here: Home / News / Northern Iowa once again looking at more snow in forecast 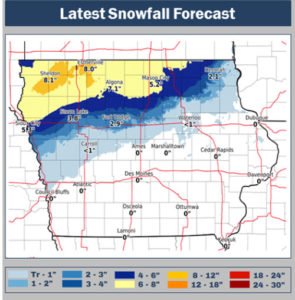 Northern Iowa is in the path of yet another winter storm. National Weather Service Meteorologist Mike Fowle says the area is still digging out from a weekend blizzard that dumped up to a foot of snow near the Minnesota border.

“It looks like we had five to eight inches around the Fort Dodge area and anywhere from four to nine inches across the Mason City area,” Fowle said. The next system is expected to bring more heavy snow to the area, along and north of Highway 20, late Tuesday night through Wednesday.

“Right now, the forecast in the Fort Dodge area is anywhere from two to five inches,” Fowle said. “Up around Algona, Estherville, and Mason City – we’re talking five to eight inches, perhaps some locally higher amounts in that area.” To make matters even worse, there could be a period of freezing rain.

“At this point, the ice amounts don’t look to be real heavy, but maybe up to a tenth-inch of freezing rain or sleet in that area,” Fowle said. Areas south of Highway 20 can expect mostly rain late Tuesday and Wednesday. High temperatures statewide today will be roughly 20 degrees below normal for mid-April. Fowle expects conditions will improve later this week, with temps climbing into the 40s and 50s.

“Normal temperatures around this time of year are in the low 60s generally, so we’re still going to be a bit below normal,” Fowle said. “For those of us dreaming of spring, we’ll at least see periods of sunshine and temperatures moderating, at least somewhat.”