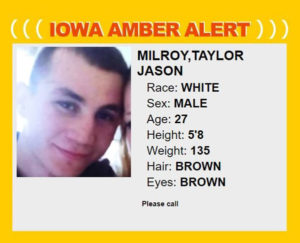 A statewide Amber Alert was issued overnight in the case of two children who were abducted in eastern Iowa.

The Clinton County Sheriff’s Department was called to Toronto in western Clinton County about 9 o’clock Monday night. The call was for a complaint of a non-custodial child abduction. Deputies interviewed the mother of the two boys — ages 2 and 4.

Aubrie O’Haver told deputies she and the father of the two boys had been grocery shopping. When they returned to her residence, O’Haver said she was unloading groceries from her vehicle when the non-custodial parent drove off with the two boys in the car.

She indicated her ex-boyfriend recently had his parental rights terminated and that he had made statements about harming everyone. The Clinton County Sheriff’s Office then put the Amber Alert System into effect. They announced they were looking for 27-year-old Taylor Jason Millroy and that he may be headed to Illinois. At 2:52 a.m., officers from the Moline, Illinois, Police Department located the two boys with Milroy at an apartment complex.