You are here: Home / News / Get your nomination ready for the best tenderloin in the state 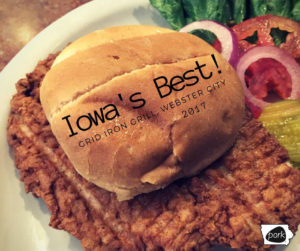 Pork Producers spokesman, Ron Birkenholz says the tenderloin is an item many restaurants across the state have on the menu. “We’re hoping for another good turnout — we had over 3,000 nominations last year with 271 different establishments named in the contest,” Birkenholz says. “We know there’s a lot of good tenderloins out there and we hope people will nominate them,” Birkenholz says.

Nominations for the best tenderloin can be submitted at www.iowapork.org. Birkenholz said the deadline for all entries is June 5th. He says the contest generates good publicity for the eateries.

“It’s good for the business, all of the past winners have told us that their business has increased exponentially after wining the contest. Even the runners up — we name a top five — and even those restaurants see a major increase in their business,” according to Birkenholz. The winning tenderloin is announced during “Pork Month” in October. It’s something he says the creators of the tenderloins anxiously await.

“It puts them on the tenderloin map if you will,” Birkenholz says, “we have people all over the midwest that follow this contest and love tenderloins and want to go to the winner’s restaurant and try it. So, it’s a great deal for the entire industry.” Last year’s winning restaurant was the “Grid Iron Grill” in Webster City.