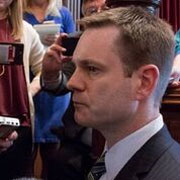 The Iowa Senate has a new “harassment prevention” policy and an updated code of conduct. Republican Senator Charles Schneider indicated a month ago when he was elected president of the state senate that updating senate “personnel guidelines” were a priority.

“First, to make sure that all those who work in and around the Iowa Senate have a clear understanding of what constitutes harassment, sexual harassment and retaliation,” Schneider said today during the Senate Rules Committee meeting, “and second to make sure that everybody understand the process for addressing complaints when they arise.”

Last fall, the state paid $1.75 million to settle a lawsuit filed by a former Iowa Senate GOP staffer who was fired in 2013 after she complained of harassment. Last month, the senator who fired Kirsten Anderson resigned after online photos and video showed him kissing a lobbyist. Schneider was elected to his new leadership position after that senator’s exit.

Schneider told said the new policy requires annual training for every senator and for all employees of the senate as well as interns. There will be a yearly review of the anti-harassment policy to ensure it’s keeping up with “best practices” in the public and private sectors.

Senate Democratic Leader Janet Petersen said it took nearly five years after the firing of an employee who was harassed to get to this moment.

“I’m hopeful that this will be a first step in the right direction to changing the culture and making the Iowa Senate a more welcome and opening place for people to work,” Petersen told reporters.

Senators unanimously voted this afternoon to update the Senate Code of Ethics as well. The update makes it clear the Senate Ethics Committee has the authority to receive and investigate complaints of harassment or retaliation. A senator’s clerk was just fired April 3 after a “credible complaint of harassment” was made. That clerk, who functioned as a secretary to Republican Senator Waylon Brown of St. Ansgar, was a paid employee of the senate and had recently completed anti-harassment training.

Senator Petersen said it appears the same male clerk had previously been fired from a similar job in the Iowa House.

“Even with the training that everyone who serves on the senate floor went through, to see misbehavior like that shows that we’ve got work to do,” Petersen said.