You are here: Home / Education / Record gift given to help Northwestern College in Orange City 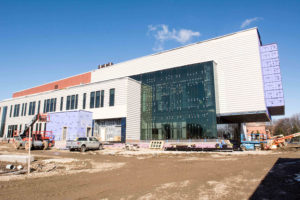 Northwestern College in Orange City is announcing the largest single gift in its history, a $6 million naming gift for its new health and natural sciences building.

“The gift is from Jack and Mary DeWitt of Holland, Michigan, who have been longtime donors and leaders from Northwestern College and come from a family that has done the same,” Beeson says. “The building will be named in their honor. It’ll be called the Jack and Mary DeWitt Family Science Center.” Beeson says the DeWitt family has a long history of generously supporting Christian higher education and Northwestern College in particular.

“The chapel and the music hall which is attached to it is named in their honor,” Beeson says. “We also have the DeWitt Theatre Arts Center and they also gave naming gifts for the physical fitness center and the athletic arena.” Beeson says the new science center will house classrooms, laboratories and faculty offices for the departments of biology, chemistry and nursing. It will also include increased space for collaborative student-faculty research. Beeson says the facility is already nearly paid in full.

“We’ve actually exceeded the goal for the building,” he says. “The building cost is $24.5-million. It’s part of a $30-million campaign. The other components of the campaign include an endowment for maintenance of the building as well as for student scholarships and student research.” Of the 30-million dollar overall goal, he says there’s just 2.6 million left to raise.