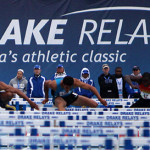 Another lineup of world-class women’s pole vaulters is slated to thrill the Drake Stadium crowd at the 2018 Drake Relays.

The women’s pole vault competition includes 2016 Olympic silver medalist and Drake Relays favorite, Sandi Morris. Morris is the American record holder in the event with a personal best of 16-4.75 (5.00m) that is also the second highest clearance ever by a woman in the event.

Another record holder from North America joins Morris in the field as Canadian national record holder Alysha Newman returns to Des Moines. Newman recently won gold at the Commonwealth Games in Australia and was seventh at the 2017 World Championships. Her Canadian record stands at 15-7 (4.75m) and she finished third last season at the Drake Relays.

Katie Nageotte, who is having her finest season as a professional, will challenge the pair as a vaulter who has shattered the 16-foot mark. That personal best of 16-1.25 (4.91m) came in winning the USA Indoor Championship this past winter en route to finishing fifth at the World Indoor Championship.

Six other vaulters in the 11-athlete field have also cleared 15 feet to ensure that this year’s Drake Relays pole vault competition will live up to the excitement produced in recent years.

Fans in Des Moines will have the opportunity to get up close and personal with five members of that field with the Pole Vault at Capital Square, Wednesday, April 25, inside the atrium of Capital Square in downtown Des Moines at 6 p.m.

Morris, Nageotte and Newman are all slated to compete in the one-of-a-kind competition along with Kristen Brown and Kristen Hixson. They will be joined by previously announced competitors in the men’s field such as Olympic medalist and 2017 World Champion Sam Kendricks and 2015 World Champion Shawn Barber. Scott Houston, Andrew Irwin and Mike Arnold will also compete inside Capital Square.

Following the Wednesday, April 25, event at Capital Square, the men will compete inside Drake Stadium Friday, April 27, at 6 p.m. The women will take to the runway at 2 p.m. Saturday, April 28.