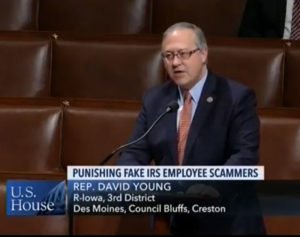 A vote is expected today in the U.S. House on a bill, drafted by Iowa Congressman David Young, that seeks to crack down on identity thieves and help victims of such fraud.

“Many in the Third District of Iowa have spoken to me about their fear of having their identity, bank or credit card numbers, and other personal information stolen,” Young said on the House floor Tuesday. The Justice for Victims of IRS Scams and Identity Theft Act would require the Attorney General and Treasury Secretary to submit reports to Congress detailing how they have prosecuted identity theft crimes.

According to Young, Americans lose billions of dollars to con artists and many Iowans worry about getting a call from their bank or credit card company explaining their information has been stolen.

“This reality can turn an individual’s and a family’s world upside down. Millions of Americans have gotten that call and many have lost everything because of identity theft,” Young said. A 2016 report indicated Americans submit up to 14,000 complaints about IRS impersonation scams every week.

“This is serious,” Young said. “These scams are indiscriminate and can impact any person at any time.” Young added that the Department of Justice should suggest “what can be done to deter criminals and prevent identity theft from happening.”