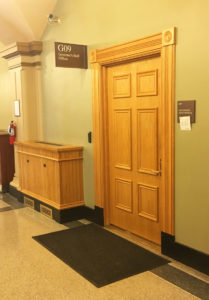 Republican lawmakers are negotiating the final budget details in the governor’s office.

Republican Governor Kim Reynolds and top Republicans in the House and Senate are continuing their private negotiations today, aiming for an agreement on how deeply to cut state taxes.

“We’re still talking. We’re still working. We’re going to get together again this afternoon,” Reynolds told reporters this morning. “And that’s how you get to consensus.”

Reynolds indicated they’ve been “very close” on the overall framework of the bill for weeks.

“It’s just how we get there, when we get there and what the details look like,” Reynolds said. “…It’s my goal to get a tax bill done this year.”

Reynolds cancelled an economic development trip to New York this week to stay at the capitol to be directly involved in negotiations. Representative Guy Vander Linden, a Republican from Oskaloosa who leads the tax-writing committee in the Iowa House, said the governor’s been a “driving force” in the negotiations, with a simple message to lawmakers.

“Get a tax bill out that I can sign and let’s get this thing going,” Vander Linden told reporters was the basic summary of Reynolds’ direction.

The main sticking point has been how big the tax cut package should be.

“I think the governor’s done a good job of laying out the path that she would like to have us to follow,” House Speaker Linda Upmeyer, a Republican from Clear Lake, told reporters Wednesday afternoon. “…The biggest thing is that we would like to make sure it’s sustainable and responsible…Hopefully we’ll get there very soon.”

Senate Republicans hope to provide a significantly larger series of tax cuts and provide them sooner. The governor has publicly said she’s not going to draw any “lines in the sand” about what must be in or out of the final package. Senate President Charles Schneider, a Republican from West Des Moines, is equally reluctant to talk details in public. Schneider indicated this week that Reynolds is offering “insight” to the process.

“I think it’s good that people are keeping open minds and wanting to work together to find something that’s good for the taxpayers of Iowa,” Schneider told reporters.