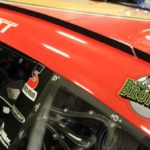 Des Moines NASCAR driver Michael Annett paid tribute to a junior hockey team in Canada last weekend at the Bristol Motor Speedway. Annett’s car had a sticker to honor the Humboldt Broncos in his Xfinity Series race. Sixteen players and staff lost their lives earlier this month in a bus crash on the way to a playoff game. Annett grew up playing hockey in Des Moines.

“I can remember back when I was a rookie with one team and how they seat the bus”, said Annett. “Veterans in the back get the good seats so they can play cards. Rookies are smashed together in the front then you have the broadcast team, the trainers and the coaches. It is amazing that stuff like that affected who was caught up in the accident.”

Annett is currently 16th in points in the Xfinity Series. His next race in Friday night at Richmond Raceway for the ToyotaCare 250.