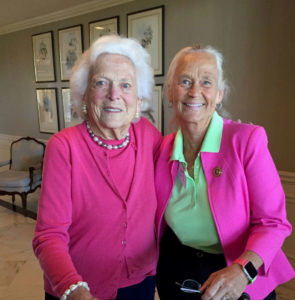 An Iowan who was a personal assistant to Barbara Bush for 4½  years is making her way to Texas to pay her respects to the former first lady.

Sixty-two-year-old Becky Beach of Des Moines first met Mrs. Bush 40 years ago as a volunteer, in the Bush home in Houston, addressing invitations for campaign events.

“I did her scheduling, her press, traveled with her, took the dog to the vet — all those glorious things,” Beach told Radio Iowa. “Back in the late ’70s, early ’80s, we didn’t have a press corps. There weren’t advance teams…Secret Service. None of that happened until he became the nominee for vice president.”

In the lead up to the 1980 Iowa Caucuses, Mrs. Bush visited each of Iowa’s 99 counties and Beach was there for each stop. Beach says on one wintry day, the woman who drove the car did something that surprised Beach and Mrs. Bush.

“We came out of the motel and she was using her hairdryer to melt the ice that was in the lock, so we could get into the car,” Beach said.

Beach worked for Mrs. Bush throughout the 1980 campaign and for the first part of George H.W. Bush’s first term as vice president. Beach left her job as a personal assistant to the future first lady at the end of 1982, but has been recruited back into the Bush family orbit several times since to work on campaigns and coordinate events.

“After 40 years of working with them, I lived at their homes both in Houston and Maine and in D.C.,” Beach said. “She would frequent say: ‘I will have accomplished my goals if my family still comes home.’…I know that was extremely important to her. She just loved her family.”

“Elegant, honest, funny, witty — but the main thing I really remember about her is her love of family and their love of her,” Beach said. “She always wanted people to feel important if they were in the same room with her. It didn’t matter if they were the people washing the dishes or a president or another a head of state.”

Beach last saw Mrs. Bush in person about 18 months ago.

“All of the gals that traveled with her — I was the first, and then the subsequent ones — we all had surprised her in Houston and had lunch with both President Bush and Mrs. Bush,” Beach said. “I sat next to her at lunch. She remembered all of the times and all the fun things we used to do. We were just doing a little reminiscing.”

Beach and the other women who traveled with Mrs. Bush plan to meet privately as a group this Friday night in Houston. Beach will be among the 1,500 invited guests at the first lady’s private funeral on Saturday.