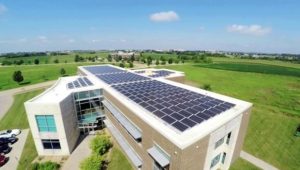 A building in eastern Iowa that houses a mechanical and electrical engineering firm is now a Net Zero energy user, which means it produces as much power as it uses.

Dwight Schumm is managing principal at Design Engineers in Cedar Rapids, which designs building systems — heating, cooling, plumbing, power and lighting. The headquarters was built in 2009.

Those 360 solar panels cover some 6,500 square feet of roof, collecting sunlight and converting it to electricity. The 102-kilowatt system supplies power to Alliant Energy during the day and draws power off the grid at night. Schumm says it’s a symbiotic approach.

“Essentially, what Net Zero means is that over the course of a year, we have produced the same amount of energy that we used,” Schumm says. “On a daily basis, it’ll float back and forth where we’re pushing out during the day and then using from the grid at night but the total net effect is that we’re producing as much energy as we use.”

While the building is now considered a Net Zero energy user, Design Engineers is in the process of getting internationally-certified as a Net Zero building. There’s only one other building in the state with that claim to fame, and it’s also in Linn County.

Two of the biggest challenges facing the environment, he says, are climate change and carbon dioxide emissions.

“We design buildings for our clients and for a lot of our clients, it’s also important to them, so we feel, too, that it’s vital that we walk the talk,” Schumm says. “We’re doing it ourselves so that we can show our clients that we’re really committed to it.”

Before adding the solar panels, Design Engineers was already one of the top performing small office sites in country with an Energy Star rating of 98 out of 100.

Last year, he says, the firm prevented the combustion of 68 tons of coal while reducing emissions at the power plant by 212,000 pounds of carbon dioxide.