You are here: Home / Fires/Accidents/Disasters / Search ramped up for missing autistic teen in La Porte City

It’s now been nearly two weeks since a teenager with autism disappeared in northeast Iowa. Police have found no sign of 16-year-old Jake Wilson, who left his home in La Porte City on the evening of April 7 for a walk to a nearby creek.

Black Hawk County Sheriff Tony Thompson told reporters Friday afternoon that investigators still believe Jake made it to the creek and “something bad happened” when he got there.

“While it’s frustrating to have to admit that our investigation is not developing huge or important leads, it’s just as validating to know that everything is continuing to point towards what we originally thought it was when we first started on Saturday evening (April 7), searching until about 1:30 in the morning,” Thompson said. He added, investigators are not ruling out the possibility of an abduction.

Thompson sought to clarify a notice issued earlier this week which asked for information about a person who may’ve been seen in Jake’s neighborhood. “Don’t misconstrue what went out,” Thompson said. “I think a lot of people said: ‘a-ha, they’ve got a suspect!’ It could have just as easily been somebody describing Jake walking…so, the information that we had – we were looking for corroboration, a second, third, fourth set of eyes that could confirm what they saw that night, at roughly that time.”

This weekend, crews are planning to use drones, sonar, and dogs to further search Wolf Creek. La Porte City Police Chief Chris Brecher said the “ramped up” effort follows changes in the weather. “We’ve been getting kayaks out there, going up and down, trying to get into the logjams that have remained in the creek,” Brecher said. 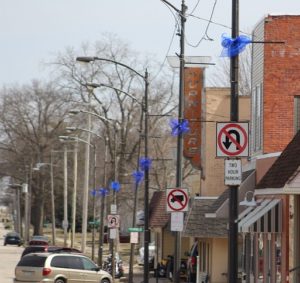 “Just with the water elevation changes that we’ve had, it has been fairly significant, so there is that opportunity to where the water would be stirring things up, shifting around…it might open up a few spots that we haven’t been able to see before.”

This week, volunteers in La Porte City tied blue ribbons to light poles as a sign of support for the Wilson family. The color blue has been tied to autism awareness campaigns.