You are here: Home / News / Iowa’s governor says it’s not her place to weigh in on Missouri governor’s fate 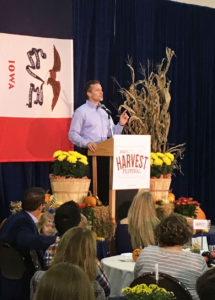 Greitens is to go on trial in May on a felony charge related to an affair. He’s accused of threatening to blackmail the woman with a graphic photo he took without her permission. A recent report by a Missouri legislative committee includes allegations that Greitens was sometimes violent with the woman.

In January, Iowa’s Republican governor issued a written statement saying she was “disappointed and saddened” by the news of Greitens’ affair. Today, during her weekly news conference, Reynolds was asked if Greitens should resign.

“It is up to the people of Missouri, the legislators or the courts to decide if he has acted inappropriately. I don’t know the details,” Reynolds said. “My job is to work on behalf of Iowans and that’s what we’re doing every day.”

The Missouri governor has said he’s under attack because he came into the governor’s office in 2017 as an outsider. Wisconsin’s Republican governor has not called on Greitens to resign, but Scott Walker has said it will be difficult for Greitens to govern as he faces the court trial and an impeachment trial in Missouri’s legislature.