You are here: Home / Fires/Accidents/Disasters / Neighbor reacts to deaths in Waterloo house fire 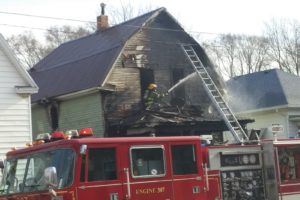 Two people died and three were injured in this Waterloo house fire.

Neighbors are in shock after two people died in a house fire in Waterloo Sunday morning.

Heather Medina lives two doors down from that house. She told KCRG TV she saw the flames as she arrived home from work around 6:30 A.M.

“I wanted to run in there to get the child out at least — but I couldn’t — there was too much smoke, flames, everything,” Medina said. Medina says the fire was burning fast and it was too dangerous to go inside. “The flames, they (were) on the porch at first, and then it reached the top of the house. They were really bad. You could feel the heat from across the street. That’s how hot it was,” she said.

A woman and boy died in the fire, while a man, woman and teenage girl escaped. No names have been released.

Medina said her kids were good friends with the boy who died. and explaining the death to them is going to hard. “It’s devastating, it’s really bad,” Medina said. The Waterloo fire chief says they do not yet know the cause of the fire.