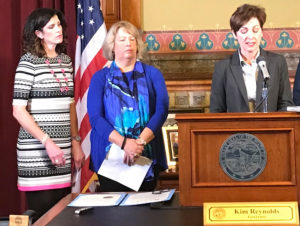 “Initially the board will develop and recommend specific steps to build an integrated, well-coordinated and sustainble children’s mental health system,” Reynolds said this morning.

The governor is asking the group to make its recommendations by the end of the year. Advocates like Peggy Huppert of the National Alliance on Mental Illness say services for children diagnosed with mental illness or who are suicidal are woefully inadequate in Iowa.

“Ever since the reorganization of adult mental health services in Iowa six years ago, what to do about the kids has been on the table,” Huppert said. “…The fact is there is still no system, no plan, no accountability and no funding.”

“This executive order is another real acknowledgement that we, as a state, need to do better, that these issues absolutely matter and we are prepared to do the hard work to get there,” Neubauer said. “…I urge Iowans to whom mental health matters to continue to tell their own stories and make their voices heard.”

The governor signed a bill earlier this year that addressed gaps in the mental health care system for adults. Reynolds said finding solutions to the system for helping children with a mental health diagnosis or who are in crisis is a priority and she plans to appoint the members of this new state board as soon as possible.