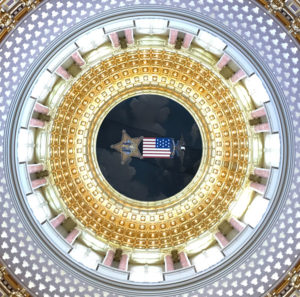 The Iowa State Capitol Dome from the inside.

There is a literal buzz in statehouse today.

Mark Willemssen, facilities manager for the Iowa legislature, says it’s the sound of a chipping hammer. It’s knocking out bricks in the capitol dome that need to be replaced.

“They’re at the lower end of the dome now and hopefully they’ll be done with that brickwork in the next week or two,” Willemssen says.

Cracks in the state capitol’s golden dome caused by leaking water, humidity and a lightning strike are being fixed. Crumbling mortar is being replaced, too. Crews working to remove bricks today are standing inside the dome, just above columns that line a walkway called the “whispering gallery.”

“It seemed as they came down the inside of the dome, the brick and the mortar got a little harder, so they had to go with bigger tools to work on that,” Willemssen says.

Restoration of the dome began a year ago. Legislators set aside $10 million for the project. Crews aim to be done sometime this fall.