You are here: Home / News / Cedar Rapids turns to corn oil to control the geese population 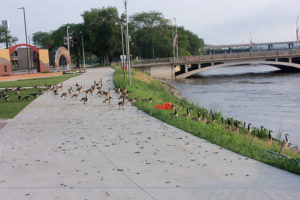 A geese gathering in Cedar Rapids.

The wild goose chase in Cedar Rapids could be coming to an end with a new method for dealing with an overpopulation of Canadian Geese.

The Cedar Rapids Parks and Recreation Department began using “egg oiling” this month to cut the goose population. Parks and Rec Supervisor, Brent Neighbor, says it starts by floating goose eggs in a bucket of water to determine their stage of development.

“Based on that stage — then you know whether it is good to oil or whether it is not,” Neighbor explains. “If it is, then you take 100 percent corn oil and then you coat the egg, and then you put it back in the nest.” He says the corn oil stops the development of the egg.

“The egg is porous and so the coating cuts off the oxygen to the interior of the egg,” Neighbor says. The eggs are left in the nest and the mother stays with them, but the never develop. More than 1,000 eggs in 200 nests have been oiled.

The city has tied all sorts of other methods to control the geese population since 1996, including big roundups where the geese were chased into pens and relocated. Neighbor says the efforts to control the population have been controversial on both sides — but the egg oiling is one that appears to be acceptable. 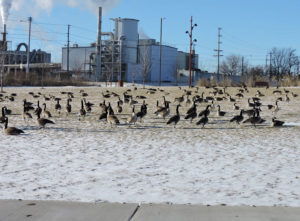 “It’s actually accepted by PETA as the most humane way to reduce populations,” he says, “so it has been accepted by both sides, which is good.” Neighbor says if they just removed the eggs then the goose could lay again and it wouldn’t solve the problem. This allows them to cut the number of new goslings and the hope is that will eventually cut the number of adults who make Cedar Rapids their home.

“Once they’re imprinted on an area and they are born in and area they are either going to stay here or not leave. And when they do leave they will come right back,” according to Neighbor. “…When we have done the roundups in the past and taken them to other areas of the state the DNR has tagged those geese and they just find them right back in Cedar Rapids.” Neighbor says the egg oiling method is also cheaper than some of the other efforts.

He says they use three park staff to oil the eggs and with the roundup they used the entire park staff and added several DNR employees to gather up the geese. “The labor savings is huge and the corn oil is very cheap.” The great goose roundups evolved after several other methods failed — including mechanical dogs designed to scare the geese away.

“We called those the Fido, the radio-controlled units. And then we’ve also tried the distress calls, lasers, decoys, coyote and fox decoys, so we’ve tried quite a few things to get them to move along, ” Neighbor says. “And it works temporarily and then it doesn’t work any more.” He says the population kept growing and the persistent geese cause all sorts of problems.

“They are up and down the sidewalks, they’re covering the law areas, they are crossing the streets, which stops traffic and gives us an unexpected traffic delay, which is dangerous to the public,” he explains. “And then also on the trails the goose droppings makes it slippery and we’ve had some slipping incidents. We’ve had interactions with bicyclists where bicyclists have been flown at and charged by geese.” He says the were always getting calls to come pick up geese that had flown into cars or gotten run over. The results of the effort could start to show in a few months.

Neighbor says they should know by this summer how effective the oil treatment has been as the remaining goose eggs hatch and they see how many new goslings there are crossing the streets and in the parks and green spaces. He says it will two to four years down the road to know if they have brought the population to a more manageable level. The goose egg oiling was done under the training and supervision of the Iowa DNR.

(Photos courtesy of the City of Cedar Rapids)