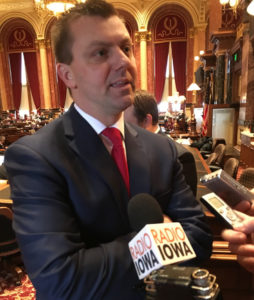 Jenga, energy drinks and microwave popcorn — just some of the items being used to explain the path to shutting down the 2018 Iowa legislature.

Senate Republican Leader Jack Whitver had a silver can of Monster Ultra Energy in his hand as he spoke with reporters earlier this week. Whitver joked he’s buying the stuff by the case these days as key legislators meet over and over, in private, to hammer out a tax plan.

“The concepts are all the same,” Whitver said. “How they fit together is big thing, but all the parts are similar and so it’s just putting that puzzle together.”

Speaking of puzzles, Republican House Speaker Linda Upmeyer of Clear Lake said crafting the state budget plan and the tax bill has been like Jenga — the game where players stack and remove wooden blocks from a teetering tower.

“The pieces that we’re working with are not new, right? So we’ve had lots of conversations about all of these things,” Upmeyer said today. “It’s how it all fits.”

As for when the pieces finally slide into place, legislators aren’t making predictions, but Senate President Charles Schneider of West Des Moines is using the same puzzle analogy as his fellow Republican leaders.

“It all fits together,” Schneider said. “The tax bill that we’re talking about fits with the budget, so we need to have conversations with everyone to make sure we’re all on the same page.”

While the Vatican uses white smoke to signal when a decision’s been made about a pope, Schneider joked that that legislators may signal a GOP deal is done with something that’s prompted fire alarms in the capitol.