You are here: Home / Human Interest / E-cigarette company to work with Iowa Attorney General to keep kids from vaping 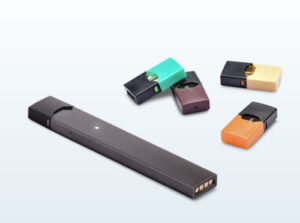 An electronic cigarette sold by JUUL.

Iowa Attorney General Tom Miller is part of a plan announced by the e-cigarette maker JUUL to keep kids from using their devices.

Miller says a group of public health experts will work on a model of how combustible that all e-cigarette companies can use.

“We’ll work with them to try and develop the best practices for a company that sells either cigarettes or e-cigarettes to take the practices that keep the product from kids,” Miller says. E-cigarette sales are banned to anyone under 18. Miller says they want to be sure kids know that e-cigarettes have their own problems.

“The whole idea is that e-cigarettes are addictive like a combustible — and we’re concerned about kids becoming addicted to nicotine,” according to Miller. “It is true that e-cigarettes are dramatically less harmful than combustibles. I think kids know that and they are right about that. But, that’s not a reason to try and e-cigarette.” JUUL is contributing $30 millions to independent research on the issue and Miller says it’s key to have a manufacturer get involved in the effort.

“It’s really important for JUUL to step forward in this way. We’ve never had an opportunity like this to work with company that’s committed to not selling to kids. That frankly is very successful selling to adults so they don’t have to sell to kids. And are committed and willing to do what’s necessary to work with us to do that,” Miller says. “It’s a unique opportunity that we are really trying to seize.”

The effort to keep kids from not smoking the regular cigarettes has been underway for decades. Miller says the e-cigarette effort is much different. “In the most important category — daily use — we are just light years ahead of where we were on combustibles,” Miller says. Miller says Juul’s work is important in making a difference.

“JUUL has a great start on this whole issue, they don’t sell to kids that under 21 even though it is legal in most states,” Miller says. “They have a very good verification system when they sell the product to make sure the (buyer) is 21. They monitor social media in terms of sales to kids. And they do some work in terms of their retailers in sales to minors.”

Miller says the most recent numbers available show among 15-to-17-year-olds, only seven percent have ever tried or used JUUL in their lifetimes.