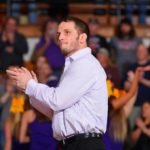 “Doug has done a tremendous job with the UNI Panther wrestling program,” Harris said. “His passion for Panther wrestling is unmatched. He cares deeply about each student-athlete in the wrestling room. We look forward to the continued success of the program on so many levels – in the classroom, in citizenship and on the competition mat.”

Schwab recently completed his eighth season as the Panther head coach. During his tenure at UNI, Schwab has posted 41 NCAA qualifiers and crowned nine All-Americans. The Panthers have registered a 71-47 dual mark over the past eight campaigns.

“I love coaching at the University of Northern Iowa,” Schwab said. “My family and I couldn’t be more excited to know that for at least the next six years it will be spent in the Cedar Valley. I know that the type of support we get from our administration, alumni and fans is special. We want them to know we are truly grateful for what they do for the program and these men that represent it on and off the mat. I have such an incredible group of coaches and student-athletes to work with. They challenge me and demand the best of me every day and I thank them for that. I cannot wait to lead this program and group of men into the future.”

Schwab guided the Panthers to a second-place finish in UNI’s inaugural appearance at the Big 12 Championships in 2018. UNI crowned its first two Big 12 champions in Taylor Lujan (174 lbs.) and Drew Foster (184 lbs.) at the meet in Tulsa, Oklahoma, this spring.