You are here: Home / News / Governor says retaliation fears likely kept others from reporting behavior of official she fired 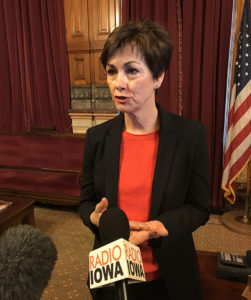 Governor Kim Reynolds says after firing the man accused of creating a hostile work environment in the Iowa Finance Authority, staff who witnessed the repeated abuse, but failed to report it, will not face additional questions about the toxic office culture.

“The culture with that was for one individual and I fired him,” Reynolds told reporters this morning.

The governor has indicated two women reported “credible” allegations of sexual harassment to her and the governor considers the rest of the agency’s staff to be victims as well.

“They potentially felt that they would be retaliated against also,” Reynolds said.

Yesterday, an Iowa Finance Authority employee gave the governor permission to release a letter written in March that alleges agency chief Dave Jamison’s actions made women feel unsafe to work there. The letter named two men — a lawyer and an administrator from Finance Authority — who had “reprimanded” Jamison in the office for his conduct, but neither man reported Jamison’s behavior to others outside the agency.

Reynolds said it would create a climate of fear among state employees if she were to investigate this case further.

“We need to make sure that they know that the expectation is to have a safe environment. That everybody needs to be able to come to work, feel safe, do their job and have a healthy environment to work in,” Reynolds said, “and if they don’t feel that way or if they see something that would not fall within those guidelines, then they have to know that there’s a process…somebody that they can report to and that action will be taken.”

Reynolds has given everyone who works in the executive branch of state government until next Tuesday to complete a training session on what constitutes sexual harassment and where they may report alleged workplace misconduct. That includes taking their concerns to the governor’s office, if they feel superiors would retaliate, and letting the employee decide if the allegations will be kept confidential.

“It’s not my story to tell,” Reynolds said this morning. “It’s not mine to tell. It’s theirs and we are not going to change the culture of sexual harassment if people don’t believe and trust in what we say is the process and how it will be handled.”

According to the woman who submitted the written complaint about the Iowa Finance Authority’s director, Jamison “made fun of the sexual harassment video we had to watch.”