You are here: Home / Agriculture / Farmers take advantage of good weather and get planting started 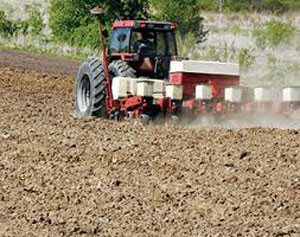 Dry and warmer weather has allowed a lot of Iowa farmers to finally get into their fields.

The new U.S.D.A. crop report shows, as of Sunday, 17% of the state’s expected corn crop has been planted. That’s still four days behind the 5-year average, but none of Iowa’s corn was in the ground one week ago. The report says farmers had nearly five days of favorable weather to get into fields.

Planting progress is much slower in northern Iowa where fields remain wet from melting snow. Meanwhile, in southeast Iowa, 44% of the corn is planted. Most of the state received no precipitation last week and temperatures climbed to as high as 79 in De Soto, Atlantic, Red Oak, and Shenandoah on the afternoon of April 27th.