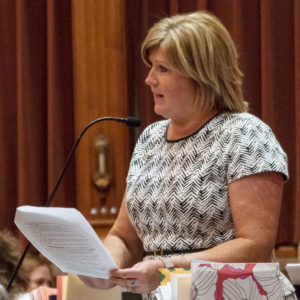 Republicans in the Iowa House and Senate have voted for what would be the country’s most restrictive anti-abortion policy if the governor signs it into law. After nine hours of debate, 51 Republicans in the House approved a bill that bans abortions after a fetal heartbeat can be detected, about the sixth week of a pregnancy.

Representative Shannon Lundgren, a Republican from Peosta, acknowledged the bill is designed to challenge Roe v Wade, the decision that legalized abortion.

“The science and technology have significantly advanced since 1973,” Lundgren said. “It is time for the Supreme Court to weigh in on the issue of life.”

Twelve hours after Lundgren’s remarks, Republican Senator Rick Bertrand of Sioux City celebrated as Republicans in the Iowa Senate were poised to pass the same bill.

“My God, doesn’t it feel good when Republicans vote like Republicans?” Bertrand asked. “…My friends, today we will make history. Today we will begin this journey as Iowa becomes ground zero now, nationally, in the life movement and the starting line back to the Supreme Court.”

Democrats like Senator Joe Bolkcom of Iowa City predicted the state will waste millions in court defending a law that’s been overturned in other states.

“This extreme bill is the new form of GOP coercion of Iowa women,” Bolkcom said. “It’s time for you to quit playing doctor.”

“This is unconstitutional and this will not stand,” McCoy said. “….All you have done is disenfranchise more women, as if you need to give them one more reason to vote against you this fall.”

Representative Sandy Salmon, a Republican from Janesville, said the bill “thrusts Iowa to the right side of history” in challenging Roe v Wade.

“With this bill, we make Iowa one of the safest places for the baby in the womb in the entire nation,” Salmon said.

Representative Amy Nielsen of North Liberty was among the many House Democrats who spoke against the bill Tuesday evening, arguing it basically bans nearly all abortions in Iowa since few women realize they’re pregnant at week six.

“I and every woman in this state deserves to have someone stand up for them and say: ‘Your choice is worth saving,'” Nielsen said.

Representative Beth Wessel-Kroeschell, a Democrat from Ames, said if the bill becomes law, women with the resources will travel to another state, like neighboring Illinois, to get an abortion.

“These restrictions do nothing to reduce or eliminate abortion,” Wessel-Kroeschell says, “but put roadblocks between a woman and her physician and making the best medical decision for her.”

And Wessel-Kroeschell suggested House Republicans passed the bill because they’d been “backed into a corner.”

“You see no way out of this legislative session until this bill passes,” Wessel-Kroeschell said. “The Senate is holding you hostage with their extreme agenda and you are willing to take this extreme vote, just to get out of here.”

A handful of Republican senators threatened to block progress on budget bills if the House failed to pass this bill. A spokeswoman for Governor Kim Reynolds says the governor is “100 percent pro-life,” but Reynolds “will not comment on any bill until she sees it in its final form.”

The bill would allow abortions after the sixth week of pregnancy in limited circumstances, such as a medical emergency, a fetal abnormality or if the pregnancy was the result of rape or incest. The bill also would ban selling or donating fetal tissue from abortions or still births for medical research.

Among the 46 “no” votes in the House on the bill were all the Democrats present, along with the following six Republicans: Chip Baltimore of Boone, Jane Bloomingdale of Northwood. Lee Hein of Monticello, Dave Maxwell of Gibson, Andy McKean of Anamosa and Louis Zumbach of Coggon.

All 28 Republicans in the Senate present voted for the bill, along with independent Senator David Johnson of Ocheydan. All the Democrats present in the Senate voted “no” on the final vote, which was taken at 2:21 a.m.