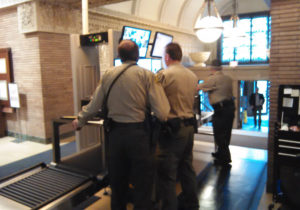 Republicans in the Iowa House have voted to end a pilot program that supporters say is reducing the number of people who sit in jail while awaiting trial.

After a person is charged with a crime, officials in Polk, Scott and Woodbury Counties this year have begun using the computer program to weigh the risk of releasing that person without requiring him or her to post a bond. Representative Gary Worthan, a Republican from Storm Lake, said some of the people who were released under this process should not have been released.

“One that comes to mind is a person who was doing drive-by shootings with children in the back seat (of his vehicle), was arrested, charged, released under this program under what they call a PM1, which is the lowest level of supervision,” Worthan said.

That person’s pre-trial monitoring was a once-a-month check-in call with a probation officer. Worthan said the non-profit group that owns the computer software won’t let legislators review how the program evaluates a prisoner and recommends a certain level of supervision.

“We’re more than willing to look at something like this,” Worthan said, “but we, as legislators, are responsible for the safety of the people of this state and without knowing some of these facts…we don’t feel this is prudent at this time.”

Representative Ako Abdul-Samad, a Democrat from Des Moines, said the program has helped some low-income people charged with a crime who couldn’t afford bail get released while they waited for their trial.

“We have individuals who…later have been found innocent, but instead of spending the time in the jail, they’ve been able to get out of jail on this program,” Abdul-Samad said. “And it’s sad that individuals get out and mess up, but what program do we have where we don’t have some bad actors?”

Representative Rick Olson, a Democrat from Des Moines, said state officials in the court and prison systems as well as county attorneys and public defenders helped develop this pilot project.

“We have these folks that are experts in the area, they want to proceed with it…but we, the 100 of us, are going to be a lot brighter, a lot smarter, a lot better informed than the experts,” Olson said.

Olson argued the program also saves taxpayers money by releasing low-risk people rather than racking up more than $100-a-day keeping them in jail, waiting for their trial.

Linn County officials put their participation in the program on hold once legislators signaled it was going to be terminated.