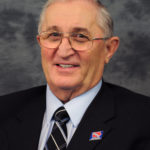 Bud Legg has been serving Iowa students for more than 50 years as a teacher, counselor, coach, school administrator, game official, and finally, as the IHSAA Information Director since 2001. He has announced his retirement from the Athletic Association will come at the end of June.

Legg came to the IHSAA after 35 years in public education, including nine years as an Associate Principal and Activities Director at Ames High School.

“The work has been a joy,” said Legg. “The people I have met through the IHSAA Hall of Fame and Service Awards, plus Board of Control and Representative Council administrators, as well as those in our schools and members of the media, have enriched my life. I am grateful for the opportunity I was given.”

In his time with the IHSAA, Legg’s duties included extensive compiling of historical information; researching and updating state meet information; historical booklets; formulating All-Time Best Lists and state records in each sport administered by the Athletic Association. He regularly issues press releases to the state’s media outlets and writes several articles for the IHSAA Bulletin.

“It’s uncanny when you talk with people from across the state, there is always someone who has a positive story about Bud and the kindness he has shown them,” said Alan Beste, IHSAA Executive Director. “He has truly been a point of reference for high school athletics and an ambassador for the value of high school activities.”

Legg has been the Association’s lead person on developing potential NFHS Hall of Fame candidates. He has served as the chairperson of the IHSAA Hall of Fame Committees in football, basketball, wrestling, and officials, where he researches, contacts nominees and writes program profiles. He is also the voice of IHSAA awards ceremonies at state tournaments. He has worked closely with the statistical programs used by member schools for the IHSAA website. He is a past recipient of the NFHS Outstanding Service Award to State Associations, and he chaired the NFHS Hall of Fame Screening Committee.