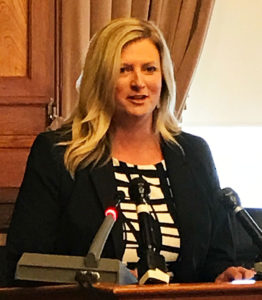 Critics of the bill that limits the energy efficiency programs electric and gas utilities offer Iowa customers are urging Governor Reynolds to veto the changes. Amanda Zwanziger, a consultant from Indianola, served on the working group that helped Reynolds develop her Iowa Energy Plan last year.

“These cuts will essentially kill the potential impact we have to make energy efficiency improvements in our facilities and it guarantees rate increases for all in the long run,” Zwanziger said during a statehouse news conference. ” That, I can reassure you, was not the intent of the Iowa Energy Plan.”

Zwanziger predicted energy use will go up if Reynolds signs the bill that cleared the Republican-led legislature and higher energy use will force MidAmerican and Alliant to raise electric and gas rates to pay for new power plants. According to Zwanziger, MidAmerican’s energy efficiency programs for electric customers will be cut by 67 percent and Alliant’s energy efficiency rebates and incentives for natural gas customers will be cut by nearly 80 percent.

“The legislature is asking our governor to choose politics over her priorities,” Zwanziger said. “…It’s hard to understand why lawmakers would put her in this situation, but here we are.”

The governor’s Iowa Energy Plan was released in December when she was lieutenant governor. “Energy efficiency and conservation” were identified as part of the “foundational pillars” of her plan. Early today, a group of Iowa Citizens for Community Improvement members staged a protest as Governor Reynolds spoke to a conference sponsored by the Iowa Economic Development Authority and the Iowa Utilities Association. MidAmerican, Alliant and other utility companies are members of the group.