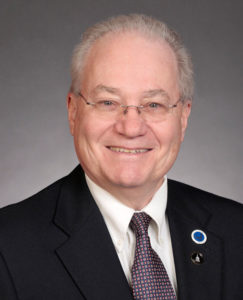 The Iowa House has given final approval to the legislature’s policy responses to the opioid epidemic. In an effort to curb “doctor shopping,” physicians will be required to register prescriptions with the state’s drug monitoring program within 24 hours.

Senator Tom Greene, a pharmacist from Burlington, said 26 other states already have that requirement. “And these states have shown large reductions in opioid prescriptions,” Greene said yesterday during Senate debate of the plan.

In addition, handwritten prescriptions will become a thing of the past. Representative John Forbes, a pharmacist in Urbandale, said having prescriptions submitted electronically will “definitely have a big impact.”

“What happens with paper prescriptions is sometimes they get altered,” Forbes said. “…Most common alteration on a prescription is they try to either change the quantity that the physician wrote or they try to change the strength of the drug.”

Today, only 10 to 15 percent of opioid prescriptions in Iowa are done electronically. Representative Dave Heaton of Mount Pleasant said he’s hoping the “continuing education” requirements in the bill for doctors will encourage restraint.

“There’s no need to hand a person a jug of pills that’ll provide opioid treatment for 30 days after a person has maybe had some surgery or some other medical treatment,” Heaton said. “…Remember, after five or six days (of opioid use), the tendency to become an addict begins to grow.”

Heaton expressed disappointment that the bill did not include limits on the number of opioid pills doctors may prescribe and he suggested that may be on legislators’ to-do list next year. Representative Chuck Isenhart of Dubuque said he’ll keep lobbying to legalize needle exchange programs.

“Hepatitis C is a growing problem in great part due to the increasing use of injectable drugs, both opioids and methamphetamines by Iowans,” Isenhart said, “especially in those under 30.”

Preliminary data indicates more than 200 deaths last year in Iowa were connected to opioid abuse. The bill won unanimous approval in the Senate yesterday and the House today. The governor is expected to sign the bill into law.