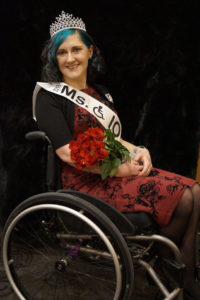 A central Iowa woman is the state’s newest advocate for people with disabilities. Laura Harter, of Des Moines, is Ms. Wheelchair Iowa for the next year.

While some might say a person is “confined” to a wheelchair, Harter says her chair brings “freedom” and is a “necessary tool” to live her life. “I have complex regional pain syndrome, known as CRPS, in my left leg,” Harter says. “It’s a chronic pain nerve disease. Utilizing a wheelchair allows me to live a full and active — at least more active life than I would otherwise be able to.”

The 30-year-old has been using a wheelchair since she was 22 and says instead of going for a run, she goes for rolls. One obstacle is sidewalks that are in disrepair, so her platform as Ms. Wheelchair Iowa will zero in on improving sidewalks, getting more curb cut-outs and better bike lanes. Harter says there are smart phone apps for mapping sidewalk conditions, practically a must for people who use wheelchairs.

“I will be holding map-a-thons and getting groups of people together and signing them up with the app,” Harter says, “then sending them out to map their neighborhoods and really record what their sidewalks are like and what the entrances to businesses are like.” Harter has a degree in human communications and works part-time as an accountant. She and her mother moved to Iowa a little over a year ago and she’s found a wonderful support network here.

“Since moving to Iowa, it has been my great pleasure to meet more people in wheelchairs than I ever had the chance to when living in Colorado,” Harter says. “Iowa has some amazing organizations for people in wheelchairs.” As Ms. Wheelchair Iowa, Harter will travel the state for the next year, speaking to audiences in schools, churches and at civic organizations. She’ll represent Iowa in the national Ms. Wheelchair America pageant in Grand Rapids, Michigan in early August.

The Ms. Wheelchair Iowa program is open to any Iowa women between the ages of 21 and 60 who use a wheelchair or a scooter for 100% of their daily mobility. The competition isn’t a beauty pageant. It’s for women who use wheelchairs to advocate for — and showcase the abilities of — people with disabilities. The contestants are judged on their achievements and accomplishments since the onset of their disability.