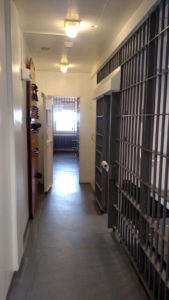 The cells in the current Floyd County Jail.

Voters in Floyd County in north-central Iowa approved a $13.5 million dollar bond issue Tuesday that will be used to build a new county jail.

The referendum need 60 percent approval and got 68 percent. County Supervisor Linda Tjaden says the current 77-year-old jail in the county courthouse makes it difficult to separate inmates from each other and the general public.

“Every time that you are bringing inmates in, we have one elevator, one stairwell, and so you are constantly in this position of moving inmates in with the general public — which is not ideal,” Tjaden says. The new jail would also bring the county up to the current state code requirements.

Tjaden says tours of the current jail and public forums on the plan for the new jail made a difference for voters. “Most people have had a very positive response, that they see what our needs are and that they’ve been willing to agree that yes we need to do something.”

A Floyd County resident with a home valued at $100,000 can expect to pay an extra $60  in taxes each year now that the bond issue has been approved.