You are here: Home / Fires/Accidents/Disasters / Continued rain increases the risk for flooding in eastern Iowa 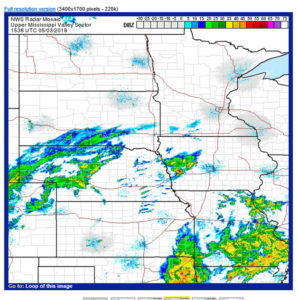 With all of this week’s rain showers and the melting snow, forecasters say the risk of flooding is rising, especially in eastern Iowa.

The National Weather Service predicts mild-to-moderate flooding for areas along the Mississippi River from McGregor in northeast Iowa all the way south to Burlington. Meteorologist Terry Simmons says flood levels could vary depending on local rainfall.

“The snowmelt is already in the stream, and it’s working its way down the river, so that’s not going to change,” Simmons says, “just the amount of rain we’re going to have and the uncertainty of where it’s going to fall.” More rain is in today’s forecast for much of the state, for the third day in a row, which Simmons says will have an impact.

“Some of this is based on the amount of rainfall that’s forecast,” Simmons says, “and that is subject to change, depending on where the storms develop and what basin the water falls in.” A field analyst with the Iowa State University Extension office in Muscatine says the rain could clear up farmers’ concerns about unseasonably dry soil.

Moderate flooding is expected early next week in the Illinois Quad Cities near Rock Island and along the state line near Louisa County. River levels in Dubuque could rise above 18 feet as soon as Friday. Flood stage there is 17 feet.