You are here: Home / News / Governor Reynolds to decide soon whether to approve new abortion law 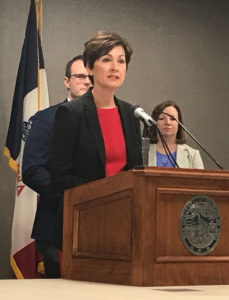 Governor Kim Reynolds says she’s waiting to receive the official copy of legislation that supporters say will place Iowa at “ground zero” in the national debate over abortion.

A bill that would ban nearly all abortions in Iowa cleared the House late Tuesday night and the Senate early Wednesday morning. On Wednesday afternoon, Reynolds told reporters she was “excited” to see the bill which bans abortions after a fetal heartbeat can be detected, but isn’t ready to public declare she’ll sign it into law.

“We’ll do like we do with every other bill, though,” Reynolds said. “We look forward to reviewing it and making a decision very soon.”

If Reynolds were to veto the bill, though, it would surprise bill backers who consider her an ally in their quest to outlaw abortion. And Iowa Attorney General Tom Miller, a Democrat, is already considering whether his office would defend a new state abortion ban in court. A lawsuit challenging it is expected if the governor signs the bill into law.

Miller’s office is already defending the state in the lawsuit seeking to overturn the 2017 law that requires a three-day waiting period for women seeking abortions in Iowa. The ACLU of Iowa and Planned Parenthood of the Heartland filed that lawsuit a year ago. It’s likely those groups would be involved in a legal challenge of this new law.

Daniel Zeno, policy counsel for the ACLU of Iowa, said the group is reviewing the six-week abortion ban and consider what “next steps” the organization might take.

“Decades of Supreme Court precedent have consistently held that any abortion ban pre-viability is unconstitutional,” Zeno said, “and the court has also held that viability outside the womb, according to medical knowledge, is about 24 weeks.”

In 2013, a federal court blocked enforcement of a North Dakota law that banned abortions after a fetal heartbeat can be detected. Backers of this similar bill in Iowa hope it could be considered by the U.S. Supreme Court, where conservative justices hold a five-to-four majority. Abortion restrictions adopted in Kentucky and Mississippi this spring are already being challenged in court.