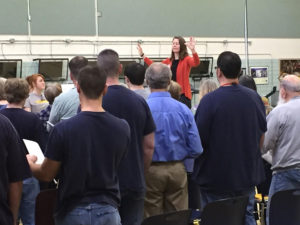 Some Iowa prison inmates will have their voices heard tonight as part of an opera opening in New York City. Mary Cohen is director of the Oakdale Community Choir.

About half of the singers in the choir are serving time in the medium security Iowa Medical and Classification Center in Coralville, known locally as the Oakdale prison. “A big part of this project is to transform how the broader public thinks about justice,” Cohen said.

She founded the Oakdale Community Choir in 2009. It was the result of an interest she developed in graduate school after seeing one of the nation’s first community prison choirs in concert.

Cohen wrote her dissertation about choral singing in lock-ups. Since arriving at the facility two-and-a-half years ago, Oakdale Warden James McKinney has become one of the bigger supporters of the vocal group. “Ninety-three percent of the people who come to prison will someday walk the streets of Iowa or wherever, and if we haven’t done something to change them, to make them better people, then they’re going to victimize somebody else,” McKinney said.

Joshua Lusch has been a tenor in the Oakdale Community Choir since 2011. He’s been in prison since 2007 and is not due to be released for another 10 years. “The choir has made me grow as a person…made me take responsibility, something I never thought I’d be doing,” Lusch said. The choir presents two public concerts a year. The audience is usually made-up of family and friends. Recently, the group recorded the song “The Prisoner’s Chorus” from the Beethoven opera “Fidelio.” That recording will be heard during a production at the Heartbeat Opera in Manhattan.

The company’s six-show run begins tonight (Thursday). Cohen, the director of the Oakdale Community Choir, will be there. The chorus members who are inmates will eventually get to watch a videotape of the opera in which their voices will be heard. “Fidelio” is the only complete opera written by Beethoven. It’s a story about a woman who goes undercover to infiltrate a prison where she believes her husband is wrongfully incarcerated.