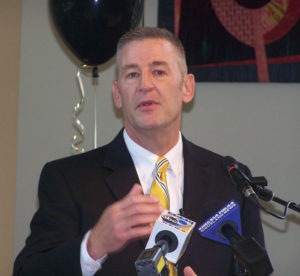 The president of Dordt College in Sioux Center announced the Christian-based, four-year school is changing its name to Dordt University.

Erik Hoekstra told students, faculty, staff, and alumni that the name will be changed in of May of next year. Hoekstra says the Board of Trustees formally approved of the name change during its recent director meeting. The Dordt College president says the word “university” behind Dordt reflects on the school’s expansion with academic programs and will impact how the school is viewed.

“In the midwest we’ve kind of gotten used to using college and university kind of interchangeably. But around the world, college is more like high school You go there when you are about 16 for a couple of years. In the United States it’s different,” Hoekstra says. The Dordt President says the name change should assist with recruiting efforts, especially for international students, but the name change will not change the school’s mission.

“When we look at our graduates going out all over the globe and they can come with their resumes, their transcripts, their diplomas saying Dordt University — we thing those doors will become more wide open to them. As well as recruiting international students — which is a big part of our deal already,” Hoekstra says. “It will I think have a bit of stature, but it won’t change our core mission of Christ-centered focus. It won’t change our community focus of focusing in on each and every individual student.”

Hoekstra says the change has been 20 years in the making. “When we first started our first masters degree program 20 years ago we had conversations about it, but at that point it was just very small. Today we are graduating dozens. I think this coming year we will probably graduate 40. Were are starting a new masters program of public administration. We are doing more online programs,” according to Hoekstra.

Hoekstra says the changing the school to a university will allow for additional scholarships, research, and fellowships. Students gathered for the announcement gave a long and loud applause. Dordt College’s student government president, Megan Van Den Berg, a junior from Wisconsin, says she and her fellow students are excited for the name change. Van Den Berg says the name change from Dordt College to Dordt University reflects on the academic excellence and programs being offered by Dordt.