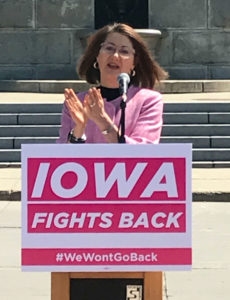 Abortion rights activists staged a rally on the statehouse grounds today, promising a legal battle over a new state law that would ban nearly all abortions in the state.

“I am here to tell Governor Reynolds: ‘We will see you in court,'” Suzanna de Baca, president of Planned Parenthood of the Heartland, said during the rally.

The Republican-led legislature passed a bill banning abortions after a fetal heartbeat is detected, which happens around the sixth week of a pregnancy. Governor Reynolds staff announced early this afternoon Reynolds would sign the bill into law at 3 p.m.

Mark Stringer, executive director of the American Civil Liberties Union of Iowa, said the abortion ban is the most restrictive in the country.

“The ACLU of Iowa will be proud to be a part of this litigation team that will stand with Planned Parenthood of the Heartland as we sue,” he said.

Many of the Republican legislators who spoke in favor of the bill during House and Senate debate are anxious for the matter to go to court, too, hoping it will be the catalyst for overturning Roe v Wade, the 1972 Supreme Court decision that legalized abortion. 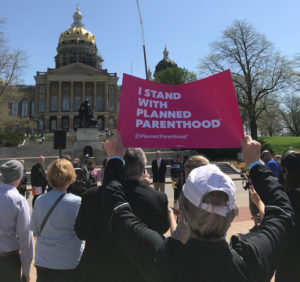 “We will do whatever it takes to make sure that we protect the rights that our mothers, our grandmothers and our great-grandmothers have already won,” Davison-Rippey said.

Rally goers also criticized a proposal that’s eligible for a vote in the House and Senate that would deny federal grants to Planned Parenthood sex ed programs for teenagers. Andi Grubb, director of education for Planned Parenthood of the Heartland, said “tens of the thousands” of Iowa teens take the courses. 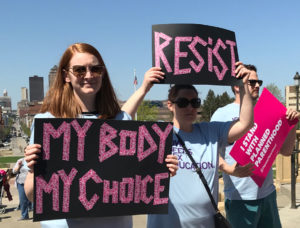 Grubbs said classes explain how to use contraceptives to avoid pregnancy and protection to avoid sexually transmitted diseases. Abstinence is also discussed.

“We answer questions honestly and we tell people it’s o.k. not to have sex until you’re ready,” Grubb said. “And, yes, as a leading source of reproductive and sexual health education, Planned Parenthood teaches safe sex.”

Critics say abortion providers have a “conflict of interest” and should not be involved in government-funded sex ed classes.

(This story was updated at 1:25 p.m. after the governor announced she intends to sign the bill into law later this afternoon.)