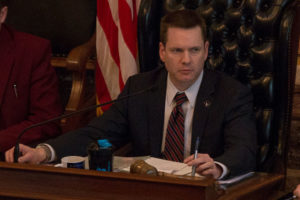 Republicans are using the words “consequential” and “historic” to describe the agenda Republican majorities in the Iowa House and Senate have enacted over the past two years.

“We seized the opportunity and I think we delivered really good things for Iowans,” House Speaker Linda Upmeyer, a Republican from Clear Lake, said.

“This puts us on a path toward growth and prosperity,” Schneider said, “and hopefully it turns us from a brain drain state into a brain gain state.”

“This has been a historic session for special interests and a particularly bad session for everyday Iowans,” Smith said.

It has been 20 years since Republicans held the majority of seats in the House and Senate at the same time a Republican held the governor’s office. Governor Kim Reynolds is praising the 2018 legislature’s passage of the tax bill as well as approval of a water improvement plan and bills to address the opioid epidemic and problems in the state’s mental health care system.

“It’s been a great session,” Reynolds said earlier this week. “I’m really proud of the accomplishments.”

A plan designed to eventually cut Iowans’ income taxes by $400 million a year was the last major piece of legislation to clear the 2018 Iowa legislature this weekend. In addition to fulfilling GOP wishes to cut taxes, the state now has a law that bans nearly all abortions, setting up a potential challenge of the U.S. Supreme Court’s 1973 ruling that legalized abortion.

A year ago, Republicans in the legislature voted to ban abortions after the 20th week of pregnancy. A 2017 law also limits the union bargaining rights of public sector workers. Upmeyer said those are accomplishments that will “fire up” the GOP base in the November election.

“This really is a historic General Assembly, for sure,” Upmeyer said. “Part of that was done last year. Part of it’s done this year.”

“I’m hopeful that we’ll see much blue skies and a much bluer senate next session,” Petersen said.

In a gesture honoring the longest-serving legislator in state history, who is retiring, Republicans gave Democratic Senator Wally Horn of Cedar Rapids the job of handling the resolution that led the senate to adjourn at 5:11 p.m. The House adjourned at 5:25 p.m.