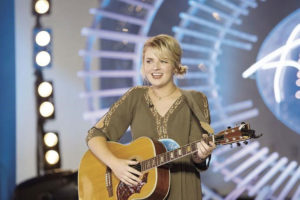 Clarksville native Maddie Poppe is one of the final seven singers and says she’s ready to take on a Prince-themed week on the “American Idol” program Sunday night.

Poppe told KCRG TV she carries her Iowa pride around everywhere she goes and often has to explain to people that Iowa is about a lot more than just corn, including here fellow contestants.

“They call me corn queen,” Poppe said. Poppe spends a lot of her down time hanging out with the other contestants, especially her roommate Katie Turner, as she says they have the same kind of sense of humor. She says she loves seeing all the signs and support coming from Clarksville. She says regardless of what happens in the competition she’s got exciting things coming. Popper met with representatives of a record label this week.

“They were pitching us songs to release. And they let us listen all the songs they had picked out for us,” Poppe said. She says there’s “a huge song writer who wrote my song.”She says it could be anyone’s game right now, and that’s why voting is crucial.

“I’m excited to come back and see everybody, but not yet. I want to keep going,” Poppe said. You can watch Poppe perform and vote for her Sunday for the Prince-themed week at 7 p.m. on “American Idol.”