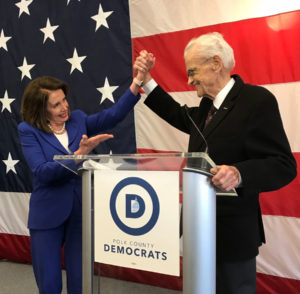 The top-ranking Democrat in congress since 2003 says her party must focus on convincing the country Democrats have a “better deal” for Americans.

“Putting forth what our purpose is, how we connect with America’s working families and what we will do, together, to make sure they succeed,” California Congresswoman Nancy Pelosi, the current minority leader in the U.S. House, said this evening in Des Moines.

Pelosi was the keynote speaker at a fundraiser for Polk County Democrats.

“I have probably been to Iowa more times than any other member of congress who is not running for president,” Pelosi joked at the start.

Pelosi reminisced about her first trip to Iowa, when she was chairwoman of California Democrats and dispatched to speak with Iowa Democratic Party officials about the timing of Iowa’s first-in-the-nation Caucuses. Pelosi’s main theme, focused on recalibrating the party’s message for the 2018 election. She conceded Democrats didn’t communicate well with voters in 2016 — and she recommended that Democrats “relentlessly hammer away the stark contrast” with Republicans in the months ahead.

Pelosi told the crowd of party activists she’s hoping Democrats win two of the three Iowa congressional seats that are currently held by Republicans and Pelosi asked Iowa Democrats to seek votes in “every corner” of the state.

“People always ask: ‘Is it a tsunami or is it a wave?’ …Whatever that is, it’s a lot of small droplets of water, This is not going to be big margins,” Pelosi said. “This is going to be small margins, many places, because we’re going into Republican districts.”

Iowa Republicans held a news conference Sunday, calling Pelosi the face “of the failures of Democrats over the last several elections” and noting Pelosi’s often listed as the least popular member of congress. The chairman of Polk County Democrats told reporters Pelosi is one voice among many in the “national conversation” about the Democratic Party’s path forward. Ohio Congressman Tim Ryan, who challenged Pelosi’s leadership position among House Democrats, was a speaker at the Polk County Democrats’ steak fry this past September.