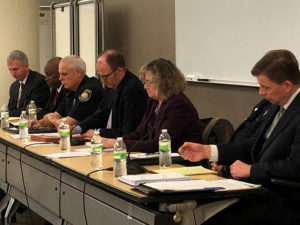 A panel hears concerns during a forum on hate crimes in Iowa City.

Iowa City police report a number of hate-related crimes in recent months, including cases of anti-Semitic graffiti on the University of Iowa campus and the distribution of “white power” fliers.

Investigators are asking residents to report any hateful incidents. Iowa City Police Chief Jody Matherly says even if it’s not a criminal act, it can help with future prosecutions.

“Sometimes what may seem like nothing or technically wasn’t illegal is that little thread we needed to later on solve something bigger,” Chief Matherly says. “It’s so important.” Even if it’s something relatively minor, Matherly says the incidents should be reported so police can look into them.

“We want to deal with that, whether it’s a hate crime or just a regular crime, or if it’s not even a crime but it’s drawn our attention to it,” Matherly says. “We want to make this a safe community and people are entitled to live free of fear.”

Matherly says because of free speech protections, not all incidents can be criminally prosecuted — and not all hate-related incidents qualify as hate crimes.